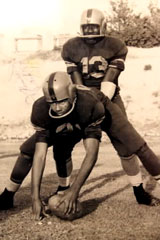 The Prairie View Interscholastic League (PVIL) played a leading role in developing African American students in the arts, literature, athletics and music from the 1920's through 1967.

The PVIL staged state championship games in football, basketball, baseball, and track. At its peak, it enrolled 500 schools. Many famous former PVIL students include Barbara Jordan, Gene Upshaw, Charley Taylor, and Joe Greene. The PVIL proudly served as the main academic and athletic competition organization for Texas' African American students for half of the 20th Century.

The move towards merging the two leagues began on October 14, 1964 when Dr. Howard A. Calkins of the UIL State Executive Committee introduced, and the full committee approved a motion urging the Legislative Council to remove the word "white" as a membership requirement for schools.

On June 9, 1965 the UIL State Executive Committee validated the Legislative Council's decision to open league membership to all public schools. The PVIL began to merge with the UIL at the start of the 1967-68 school year and disbanded at the end of the 1969-70 school year.

Nevertheless, the contribution made by PVIL students, teachers and coaches is extraordinary and established a legacy that continues to enhance the value of athletic, academic and music competition in Texas.